Differences in Simulation Between BobCAD and NC Editor

One of the most popular questions about the simulation in NC Editor is “Why do I need it when I already can simulate my program in BobCAD?” This article will go through the differences between what is happening in the simulation of BobCAD versus NC Editor. 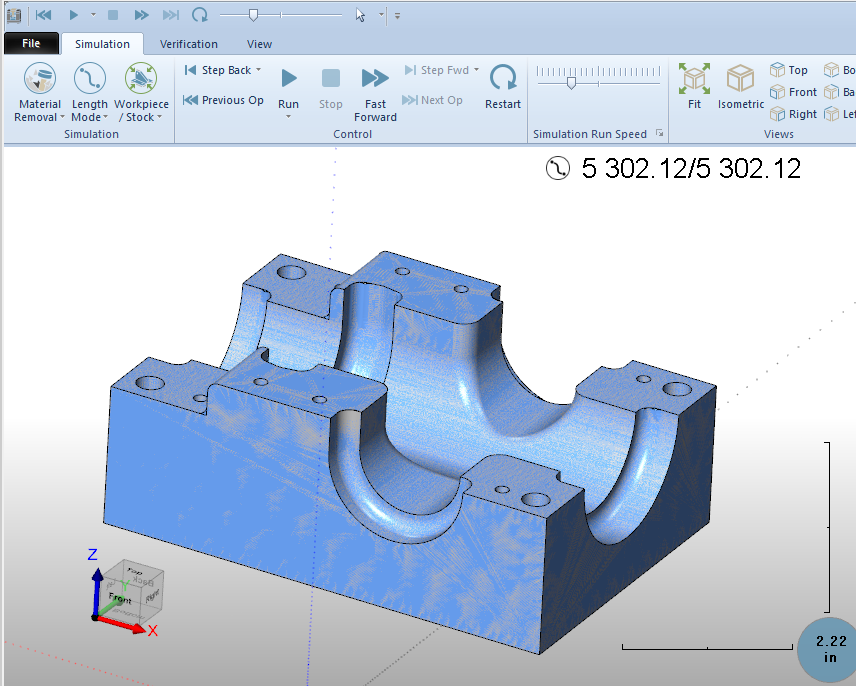 The BobCAD simulation is a quick tool that can be used inside of BobCAD to simulate the current job. Due to the factor that the “Post” function is not required to be used prior to running the simulation, the simulator in BobCAD will only simulate out the toolpath that has been created by the user as opposed to the actual G-Code that will be sent to the machine. Each machine has different G-Code formats that are needed depending on the Controller that is being used for that machine and the machine type (Lathe, Mill, etc..). So, this is the reason that the simulator inside of BobCAD is only based on the toolpath (before converting to G-Code).

Simulating in the NC Editor:

Shown above is the exact same part file in Picture 1, but instead of being simulated in BobCAD it was simulated in NC Editor. As described above, the basic flow chart of BobCAD would be to design a model, create toolpath, simulate in BobCAD, and then use the post processor to convert the toolpath into G-Code. The internal BobCAD simulation will only show the toolpath, it is unable to show issues that might be in the G-Code since they are further down the flow chart.

The part shown in picture 2 shows the aftermath of a drilling feature where the post told the tool to return to the feed plane instead of the rapid plane (G98 versus G99). Due to the factor that the simulator in BobCAD assumes that the tool will return to rapid plane during a drilling cycle it was unable to catch the crash before posting out the code and sending it to the machine as shown in Picture 1. The main difference is that NC Editor receives the G-Code, stock, machine setup, and tooling information from BobCAD and will simulate out the same G Code that a machine will receive to run this program. Since the NC Editor simulates out the code that was from the post processor it was able to catch the Drilling crash before it got sent to the machine.

NOTE: 99% of the time the simulator and NC Editor should both show the same exact part at the end of the simulator. Primarily the only time there will be differences are when there are issues with the post processor (which are strenuously tested before getting to customers).

Thanks, good feature to verify code when we edit the posted G code manually.